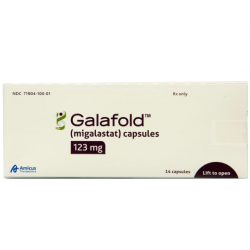 Medical uses
Warning & Precautions
Documentation & Availability
Sourcing & Delivery
FAQ
Medical uses
Galafold is an alpha-galactosidase A (alpha-Gal A) pharmacological chaperone used for the treatment of adults with Fabry disease who have a certain genetic change (variant) in an enzyme alpha-Gal A that is amenable (responsive) to Galafold.
Recommended Dosage: The recommended dosage regimen of Galafold capsules is 123 mg orally once every other day at the same time of day on an empty stomach. Avoid consuming food at least 2 hours before and 2 hours after taking capsules to give at least four hours fast. Clear liquids can be consumed during this four-hour time-span. Swallow capsules whole without cutting, crushing, or chewing. Do not take this medicine on 2 successive days.
If a dose of Galafold is missed entirely for the day, take the missed dose only if it is within 12 hours of the normal time that the dose should have been taken. In case more than 12 hours have passed, resume taking your dose at the very next planned dosing day/time, as per the every-other-day dosing schedule.
Warning & Precautions
Documentation & Availability

What documents are required to import GALAFOLD to India?

GALAFOLD (Migalastat) Capsules can be imported by patients or government hospitals on the name of the patients only.

The following documentation required to import the product:

How does order be confirmed?

The order will be confirmed only after the receipt of:

Is GALAFOLD available in India?

GALAFOLD can be made available to patients, doctors and hospitals at Mumbai, Kolkata, Hyderabad, Chennai, Ahmedabad, Delhi, Bangalore, Srinagar, Jammu, Jaipur, Chandigarh, Ludhiana, Noida, Gurgaon, Lucknow and Pune and other cities in India. The order will be confirmed only after the receipt of a valid prescription from the doctor and import permit.

IPN (Indian Pharma Network) can facilitate the supply of GALAFOLD (prescription medicines) to all locations in the world and in India after fulfilling the legal requirement (if applicable).

We take guarantee of quality and delivery anywhere in the world as per the buyer’s requirements.

What is the Generic Name for the trade name drug Galafold®?

Migalastat is Generic Name for the trade name drug Galafold®.

What is the Manufacturer Name of Galafold®?

Galafold® is manufactured by Amicus Therapeutics.

Is Galafold® approved by the FDA?

Yes, Galafold® is approved by the FDA. Date of first/initial approval: August 10, 2018.

Where can I get Migalastat at the best price in India?

What is the dosage and form of Galafold® supplied?

Galafold® is supplied as Capsules: 123 mg for oral administration.

What are the most common side effects with Galafold®?

The most common side effects with Galafold® include: nausea, headache, urinary tract infection, pyrexia and nasopharyngitis.

How much does Migalastat cost in India?

The cost of migalastat capsules in India is reasonable. In order to procure this Fabry disease medication authentically, you can Call or WhatsApp +91-9310090915 or send mail to info@indianpharmanetwork.in.

What are the storage conditions of Galafold®?

Is it safe to buy Galafold® online from India?

Yes, You can buy galafold 123 mg capsules online from India at the best price from Indian Pharma Network (IPN) if Galafold® has not been approved or is not available in your country.

What are the Highlights of prescribing information for Galafold®?

If you have any questions or need any help, contact our Patient Support Team. We will get in touch with you within 24 hours from Monday to Friday between 9:00 and 10:00 CET.

All Trademarks and Brands that appear on the website belong to their respective owners and indianpharmanetwork does not lay any claim on them we only provide Information.